Only The Young made their X Factor debut at the 2014 audition earlier this year singing an Elton John classic.

The band members whose names are – Mikey Bromley (19), Betsy-Blue English (18), Parisa Tarjomani (20) and Charlie George (17) – are hoping they have what it takes to be the next big thing on the UK music scene.

Currently all the band members live together at Parsia’s house in London and Dermot questioned Parsia’s mum why she allowed three others to just move in.

However, they tell the judges that they’re genuinely best friends, and they spend every day together. They live together, so they naturally have chemistry.

The group went on to perform an acoustic version of Elton John’s ‘Something About the Way You Look Tonight’, and Simon’s face lights up almost instantly.

After their performance Cheryl told the band: “That’s how you do an audition. It’s so refreshing to have someone original. You were a little nervous and I don’t know why”. 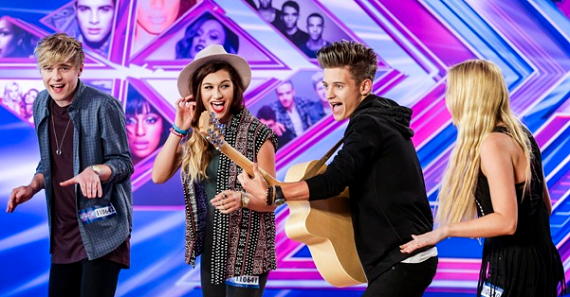