X Factor star Sam Bailey got a big surprise this week when her biggest idol, legendary singer Michael Bolton, paid her a visit at The X Factor house. 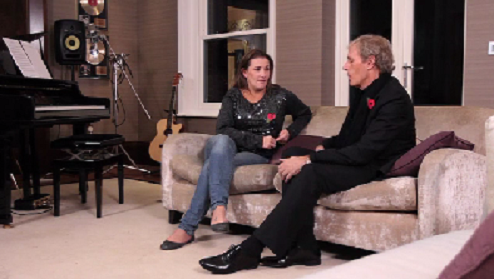 The ‘All For Love’ hitmaker has been a massive fan of Sam’s since he first heard her sing on the ITV show and it’s seems Sam was genuinely shocked when the American star turned up for a chat.

Bolton revealed that he has been communicating with Sam via Twitter:

“This tweeting started happening and then it turned out that someone told me ‘Sam is a fan of yours’, and then I just started tweeting her. I wanted to come down and see her but I was meant to be flying back to the US so I called a friend of mine and told him about Sam, (he’s a great record producer that works for Pink) I said I’m going to be a day late.”

“I woke up this morning excited about meeting Sam and telling her how much I believe in her and you know you can see that everybody loves her and looks up to her, she is an amazing woman, she has a blessing of an instrument.”

See the surprise meeting in the video below: