18-year-old Justin Peng from Leicester tired out for stardom at The X Factor auditions this year. 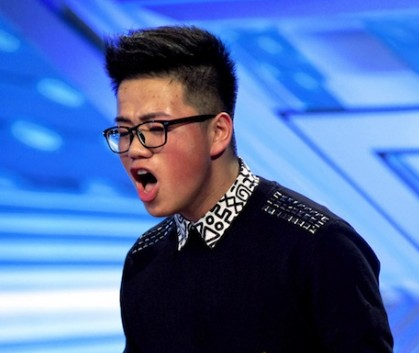 The maths student who is originally from China, surprised the judges with his performance after getting Nicole Scherzinger on side by offering her a rose.

Before his perfromance Justin said:

“I moved from China but my parents are all there, my family…I am here alone. At the moment I am studying math, my favourite math is about numbers and equations…it just excites me all the time.”

“I am looking forward to seeing Nicole, she is hot, she is fabulous, she is a good singer… I really want to impress Nicole and of course I want four yeses.”

Justin sang Whitney Houston’s classic ‘I Look To You.’ for the panel and after his rendition Gary Barlow admits:

“I have got to be honest, I wasn’t expecting that.”

“I adore you. I was quite impressed.”

Justin went through to the second audition round with 4 yeses. See his audition performance in the second video below.