School Girl Erraid Davies from Shetland, Scotland, who suffers from Perthes’ disease, has won a bronze medal at the Commonwealth Games.

The 13-year-old started swimming after developing a rare hip condition called Perthes’ disease when she was three which prevented her playing most sports.

However, the youngster’s determination has now made her a national hero after she became the youngest ever competitor from any country to win a Commonwealth Games medal.

Erraid won her historic medal in the women’s Para-Sport 100m breaststroke final after she had set a new personal best for the second time in a day. Erraid had come second in the heat and fought her way into the medal positions in the last quarter of the final.

After her big win Erraid said: “I am really, really happy. I knew there were only seven of us in the event and while there was a chance, I didn’t really expect this. I came here wanting to do my best and I had PBs in both heat and final so that’s great. I’ve been working hard on my starts and my turns for the past few weeks and that’s helped me a lot.” 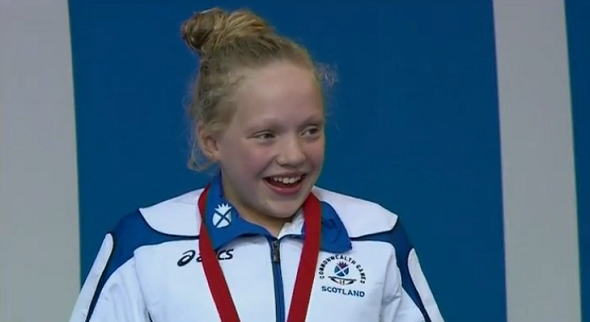