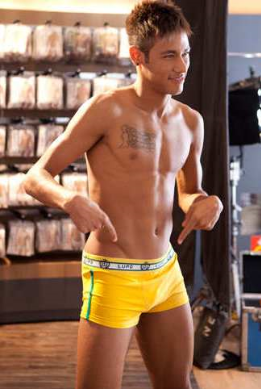 Brazilian football player Neymar, have been the star of the 2013 FIFA Confederations Cup and is set to light up the 2014 World Cup next year, but while everyone seem to be loving is work on the football field, off it some are less pleased particularly the gay lobby.

The football star has emerged as a advertisers dream over the past few years and in a recent ad Neymar strips down to his underwear to model for women who comes into a clothing store. However, when a man enters and asks to see the latest underwear, the soccer star sneaks out the door.

The ad has since been condemned by many gay men around the world has homophobic.

The company that made the ad, quickly moved to calm things down by issuing a statement, in which they insist the commercial is not homophobic, adding that they wish to “ensure respect for all consumers of their products, regardless of social class, nationality, religion and sexual orientation.” Neymar sneaking away from the muscular gentleman was supposed to give the ad a “playful tone,”

Surely the advertising company is right. Is it not just a bit of fun?