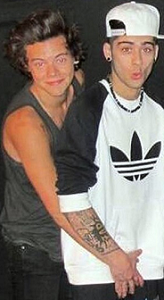 The gaydar beacon seem to be rising in the One Direction camp as Harry Styles and Zayn Malik display an intimate gay affection for each other in public.

Malik and Styles was posing for photographs after a gig in Atlanta, USA when Styles grabbed the Bradford born Zayn Malik by his crotch for the photo shot.

It all happened in front of a group of young fans outside their concert venue and Malik didn’t seem to mind as he lovingly held Styles hand in place.

This is also not the first time the boys have been seen getting saucy with one another, a week ago the One Direction stars made headlines when Malik ate sweets from a candy thong that Styles was wearing on stage.

There have also been many photos with the boys showing lots of affection for each other on the web (see samples below). We can’t help but to ask the question, if this is what they do in public, what on earth goes on between them behind closed doors? Or is it all just a big gay game?

3 thoughts on “Is there Gay Love blossoming between Harry Styles and Zayn Malik or just Gay Games?”