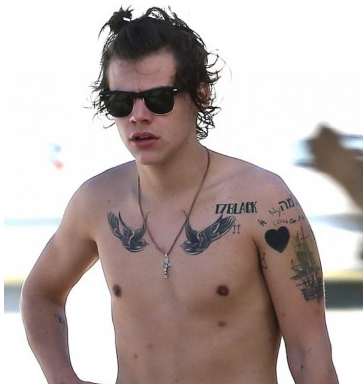 One Direction’s heartthrob Harry Styles took time out of the bands US tour to meet fans in Miami but they were in for a treat when he stripped off and wondered around topless showing off his abs and tattoos.

Pressyparty report, “Harry Styles treated fans to a glimpse of his abs as One Direction hit Miami.

“The group are currently in the States as their Take Me Home tour visits the US following a successful run around Europe.”

Harry delighted fans as he wore nothing more than a pair of little shorts during the impromptu walkabout with band mate Niall Horan, who kept his shirt on.

The One D lads have managed to find some downtime in the sunshine state of Florida, and were spotted sunning themselves on a luxury yacht earlier this week.