After three weeks the girls’ team are still without a win and tonight the sword fell on Sophie Lau when the teams TidySidey box failed to impress Lord Sugar and potential buyers.

The candidates were set the task of designing their own multi-functional flat-pack furniture and then to pitch it to potential buyers. 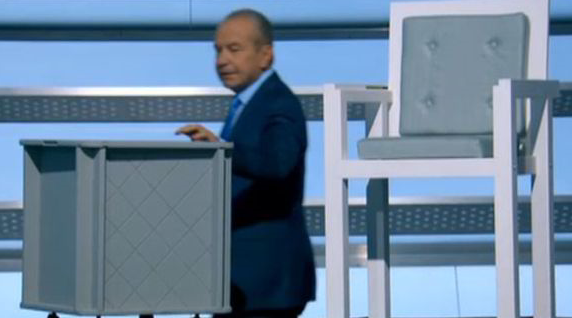 The girls team (Evolve) designed the ‘TidySidey’, a portable storage unit, tray and stool. Their sub-team sold 174 units. The department store ordered 0 units and the catalogue chain ordered 0 units, resulting in a total order of 174 units.

The boys team (Endeavour) designed the ‘Foldo’, a table that turns into a chair. Their sub-team sold 216 units. The department store ordered 500 units subject to some design tweaks, and the catalogue chain ordered 2,500 units, resulting in a total order of 3,216 units.

This was one of the biggest wins we have seen on the Apprentice for some time.

Lord Sugar praised the boy’s team, saying: “Alex, this is one of the best products that I have seen in all the years that I have been in this boardroom. Very, very good indeed.”

But it was the third loss in a row for the girls, and Lord Sugar told them: “Ladies this is getting very disappointing. It doesn’t matter how good you pitch, your product sucks. It’s like going into war with a peashooter.”

Project Manager Natalie decided to bring Uzma and Sophie back into the boardroom and Lord Sugar delivered his verdict.

After a heated debate between the girls as to who was at fault, Lord sugar said:

“Natalie, this was a disaster, an unforgivable disaster. And I’ve come to the conclusion that out of the three of you here today, and this may be unfair, but my gut feeling tells me that, Sophie, you’re fired.”