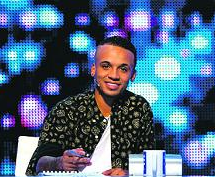 JLS band member Aston Merrygold return to the reality TV scene this year on SKY HD as a judge on the hit show Got To Dance.

Merrygold got the opportunity after fellow judge Adam Garcia stood down at the end of last season to focus on other commitments.

Merrygold and his JLS band mates launched their music career when they entered The X Factor back in 2008 and finished as runners-up to Alexandra Burke. The boyband has since gone on to have a string of chart topping hits and platinum selling albums to their credit.

On taking up is appointment Merrygold told SKY TV: “I have always been a fan of Got to Dance and I’m absolutely buzzing to be part of the best dance show on TV. My past experience on talent shows will help me understand what the contestants are going through and I can’t wait to get started.”