It is the start of the third week on MasterChef 2014 and the first six of this week’s twelve chefs are set to take on the fifth Invention Test of the series.

However, before the cooks can get their hands on the ingredients to create a dish to impress, chef John Torode takes on the challenge himself, showing the viewers at home just what is possible with the few good quality ingredients.

In two sealed boxes of ingredients – one sweet and one savoury, the cooks must choose the one they feel will give them the best chance to showcase their skills. The sweet ingredients include apples, chestnuts, cloves, sweet wine, amaretto, cinnamon sticks, and brioche, while the savoury box contains duck breast, mussels, rainbow chard, beetroot, spring onion, plums, coriander, thyme, coconut milk, puy lentils and goat’s cheese.

Today John opts for the savoury box and serves up a pan fried duck breast with goats cheese beignet, lentils, rainbow chard with cubes of beetroot and thyme dish.

For the amateur cooks, they have just one hour to cook a dish good enough to keep them in the competition. The two that produce the least impressive dish as judged by John Torode and Greg Wallace, will see their Masterchef experience cut short as they board the bus home. 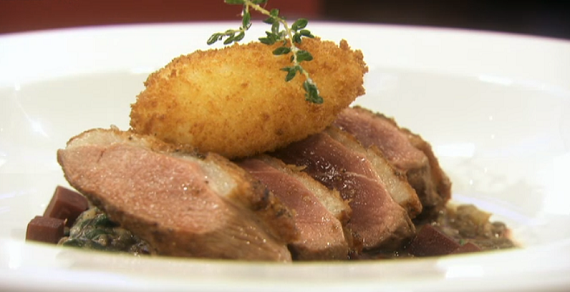