Its day two of the second week of MasterChef 2014 and and Joel, Angela, Verity, David, Liam and Oliver steps into the MasterChef kitchen to showcase their cooking skills to judges John Tordoe and Gregg Wallace.

For their first challenge, the contestants were asked to cook their calling card, a practised dish that represents who they are as a cook. They had just one hour to dazzle the judges with one plate of food that showed just what they can do.

They then faced the infamous invention test, choosing between two sealed boxes of ingredients – one sweet and one savoury. Chef John Torode also takes on this challenge himself, showing the viewers at home just what is possible with the few ingredients. He makes a delicious looking raspberry and rosewater custard tart with rosewater cream.

The amateur cooks had just one hour to prepare a dish good enough to keep them in the competition before two are sent home.

The four remaining cooks faced one more challenge to obtain a place in the quarter-final. They had to cook an impressive menu for MasterChef champion, Tim Anderson, joins 2012 champion Shelina Permalloo and 2008 finalist Jonny Stevenson.

After a tense couple of days in the kitchen, the cooks that impressed the judges the most were Angela, David and Oliver. All three were put through to the quarter-finals. 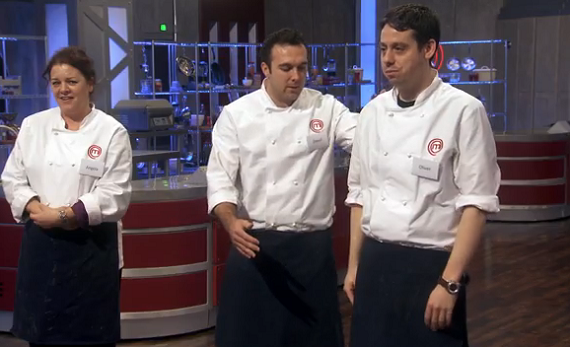