The new series of Top Gear kicked off last week with a bang. It was packed with great cars, amazing drives and ended in a loud bang.

This week in episode 2 of the hit BBC motoring show, aging dynamic all action packed trio, Richard Hammond Jeremy Clarkson and James May, don’t look like slowing down any time soon as they head out to distant lands to showcase motoring in a nonconventional way once again.

Richard Hammond is on the shores of Lake Como testing the exciting new Alfa Romeo 4C, a mid-engined machine from one of the world’s most beloved sports car makers.

Hammond’s enjoyment of the super-lightweight, 237 horsepower beauty is brought to an abrupt halt by the arrival of Jeremy Clarkson on a quad bike, demanding a race to the far end of the vast lake. Unfortunately for Hammond, Clarkson’s quad bike is not entirely as it first seems. 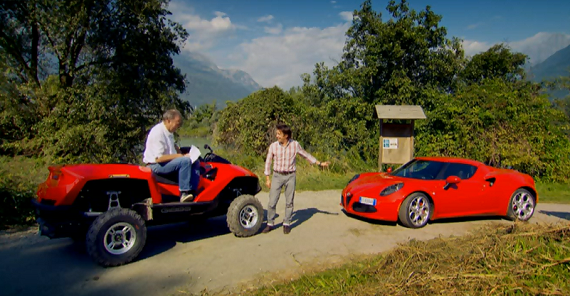 Jeremey Clarkson is in the genteel surroundings of Bruge and at the rather less sedate Spa Grand Prix track in order to test a thrilling new breed of hybrid hypercar: the stunning, 904 horsepower McLaren P1.

Meanwhile, James May is at the vast Camp Bastion in Afghanistan looking at the incredible efforts behind the army’s largest vehicle redeployment since the Second World War.