Heston Blumenthal Channel 4 hit food series Heston’s Great British Food, is back on our screens from the 1st May focusing on the history and origin of some classic British dishes.

The first episode will see Heston focus on British pies, as he sets about a culinary journey that takes him back to the past and then to the present where he puts a modern take on the food.

Speaking on ITV This Morning the celebrity chef said:

“We look at the history of the dish, so for pies go back to the first pies…. We found out the first pies the pastry was just a casing it was rock hard, flour and water, until the 1700s/the late 1600s. Some Italian chef thought, ‘if I put fat in the mix and you can eat the pastry’.

“The pie as we know it today was born. But before that think of it like a Tupperware container. And pies went on from there, from the cheapest of the cheap, to theatrical centrepieces served to Kings and Queens.”

One of the dishes Heston came across was ‘Bride Pye’. He explained:

“It was a pre-wedding cake, all different fillings artichokes and testicles and sweet breads.”

“So we took the old recipe and cook it as near as possible to the original recipe to see what people think, and what I think about it as I cook it. It’s just part of the development process to give me inspiration.” 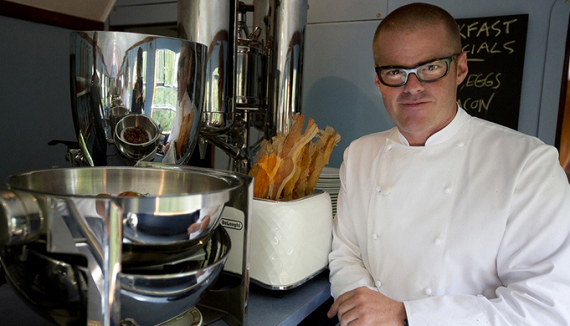