Singing superstar and X Factor judge Nicole Scherzinger is one of the most beautiful women in the world today and a woman that most males would love to kiss, but not little Harley Lane. 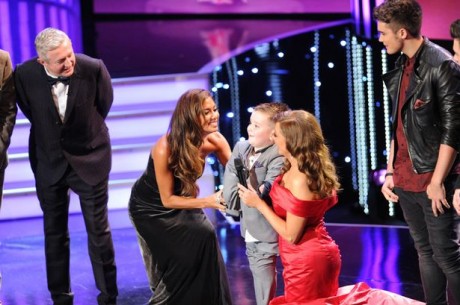 The X Factor judge was presenting Harley with a trophy at the Pride Of Britain awards last night and as she chatted with the eight year old on stage about scooping the Child of Courage award, the little lad played hard to get by refusing to kiss the Pussycat Doll star.

Nicole said: “Hey little buddy how are you? Can I give you this award” to which Harley laughed “ohhhhh yes!”

Scherzinger then asked if she could kiss Lane in front of the star studded audience. The little boy giggled:

The eight year old has been a busy boy lately concentrating all his efforts on fund-raising funds for the hospital that saved his life a few years ago.

When the Stockport lad was three years old he contracted meningitis and as a result lost all four limbs.

He has adjusted well to his new prosthetic arms and legs and recently completed the 1.5km Bupa Mini Great Manchester Run, raising more than £1,000 for charity as a result.