Duncan James and Anthony Costa from Blue spoke on the BBC’s Newsnight program about Bomb and Rape threats sent to their family members by Twitter troll. 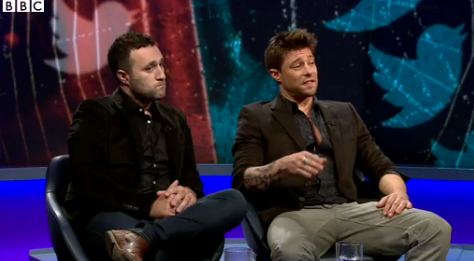 They called for urgent action to be taken by Twitter to aid the police in identifying the person or persons responsible.

The boys revealed the impact the Twitter message have had on their families following the rape and bomb treats sent to Anthony’s sister and the mother of Duncan.

The tweets warned the singers that bombs in their family homes would go off at a specific time.

Police have taken the claims seriously and searched the houses for more than two hours but found nothing.

Antony, was also insulted over his Jewish heritage. He said: “The messages made me feel sick to my stomach. I was scared.
“I understand that working in my job means that you can be a target for trolls, but this was disgusting. The police were called and they came to my home and made sure we were protected.”

Duncan added: “I felt extremely frightened for my mother’s wellbeing.”

Both men are now calling for Twitter trolls to be named, shamed and prosecuted to serve as a deterrent to others.