Who ran onto the stage during Stereo Kicks You Are Not Alone performance on The X Factor?

The X Factor boyband had their performance interrupted tonight when a intruder ran not to the stage, but the eight piece band continue with their song.

A man stormed onto the stage and tried to disrupt their version of the Michael Jackson track prompting the show’s security team to tackle him and drag him away.

“I don’t know how I would have dealt with what you just dealt with,” Cheryl told the boys.

“To carry on like that deserves a lot of credit.”

Stereo Kicks told Dermot: “It’s not good when you put your heart into it and someone tries to ruin it.”

Simon added: “Louis, you were going to turn them into a five-piece and now you’ve turned them into a nine-piece.”

Mel joked: “Cheryl thought it was Mark Owen from Take That!”

The man appeared to hi-five some of the band members before being dragged off by security. 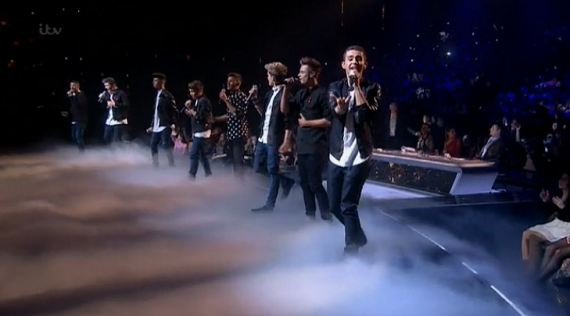