There seem to be a bit of a rebellion in Louis Walsh’s X Factor camp lately. Last week Louis annoyed Luke Friend when he announced live on radio that he wanted Nicolas to win the show and today Nicolas has pointed the finger at the Irish judge over average song choices. 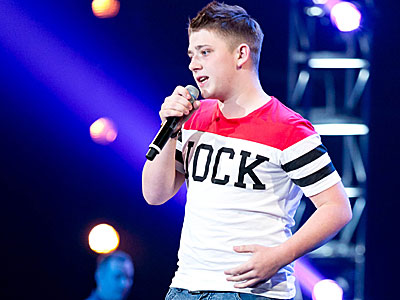 The 17 year old singer’s outburst came after his rendition of Take That’s ‘Greatest Day’ was seen has one of Scott’s lesser performances by the panel.

Nicholas claimed in his VT that he chose the song because Gary Barlow is his ‘musical hero’ but it seems he may not have been telling the whole truth because now he’s admitted that his mentor Louis Walsh never lets him sing his own songs.

Presenter Caroline Flack asked if it is time for Nick to put his foot down and make his opinion heard but he replied:

“I say that but I want to do music and they say ‘the public don’t know that’ or ‘it’s not big enough.’ There is always something. I pick big songs and sometimes they turn round and go ‘you can’t do that.’ That’s where I am failing, I want to do big songs and show the judges what I am really made of.”