Kingsland, who recently changed their name to Kingsland Road made it to Gary Barlow’s Judges House in New York, and managed to produce a performance that saw them book their place in the X Factor final 12. 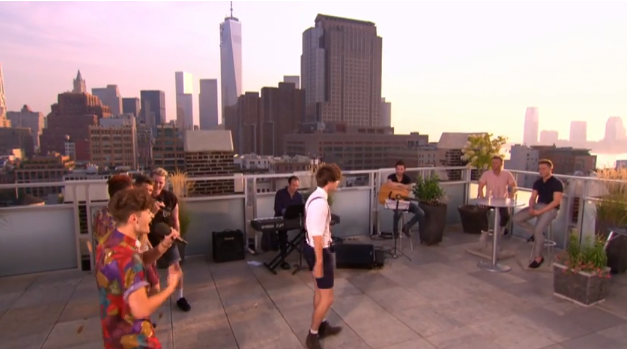 The group performed the Olly Murs track ‘Dance With Me Tonight’ for Gary Barlow and as it happens, Olly Murs himself.

Before they sang, the London based boyband explained why success on the X Factor meant so much to them:

“To get a yes and work with Gary Barlow would be so overwhelming. We are that close and to go home with a no would be heart breaking. We know we are not perfect, we are rough and we need polishing up but I know Gary would be the man to do it.”

“Everything boils down to this moment, everything. This is a competition where you can’t just get through on your own belief, you need someone else to push you that extra mile and that’s where we need Gary’s belief. Right now it needs to happen, otherwise the chances are so slim that we are ever going to do anything.”

After their performance the Take That front man told the boys:

“This is the worst bit! I reminisce when I see you guys. It really does make me think of Jason, Mark, Howard, Robbie. I just do. I can see 23 years ago where we started is where you are at right now.”

“You all have good voices but there is work to be done. We are weeks away from live shows and I think there’s quite a lot to do on you guys. Yesterday there was people who sang better than you, tighter than you, they sounded better and that’s my issue.”

Finally the Take That star put the band out of their misery and told them:

“I have made my decision, you’re going through to live shows.”