John Torode and Lisa Faulkner served up a tasty seared salmon and lentils salad with watercress and a vinaigrette dressing on John and Lisa’s Weekend Kitchen. 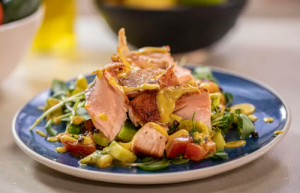 See John’s recipes in his book titled: My Kind of Food: Recipes I Love to Cook at Home