If there is one thing the One Direction boys enjoy more than singing, it is having  a laugh and a bit of fun with each. 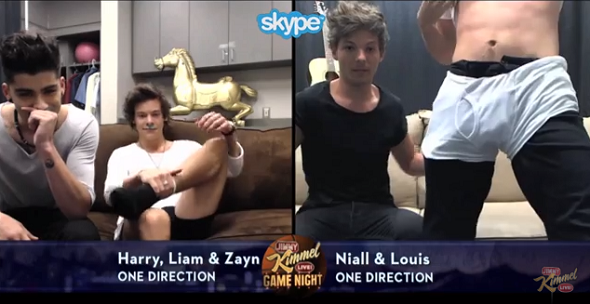 This week they made us laugh with their antics on the Jimmy Kimmel’s show in the USA playing the Skype Scavenger Hunt game.

The boys were split into two teams – Harry Styles, Liam Payne and Zayn Malik on one team up against Niall Horan and Louis Tomlinson on the other.

Their first task was to rush to the bathroom and add toothpaste facial hair to their faces. Jimmy declared Team Niall/Louis the winners.

On the next task the boys had to show off their best American accents. Harry and Liam certainly gave their best attempt, but we were not quite sure what Zayn Malik was doing. In the next room Niall tried to impress with his best Nashville dialect but it was not enough to win over Jimmy Kimmel who declared the other team the winner.

On the third and final task Harry decided to lose his pants. Check out this video to see it all:

Not sure if you followed the rules Harry!

values - JB from JLS takes to the farm on Countryfile