Gino makes profiteroles with chocolate for the festive period on today’s Let’s Do Christmas with Gino and Mel.

A profiterole, cream puff or choux à la crème is a French Dessert choux pastry ball filled with whipped cream, pastry cream, or ice cream; custard can also be substituted as a filling. 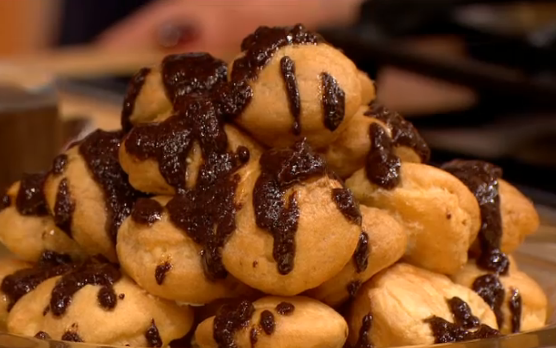 To make the choux pastry, Gino sifts the flour onto a large sheet of baking parchment. The puts the butter, water, sugar and salt in a pan and heated it gently until the butter was completely melted.

When bubbling, he removed it quickly from the heat and tipped it in the flour all at once. He then beats the mixture with a wooden spoon until the mixture forms a dough that leaves the side of the pan clean.

He returns it to a low heat, stirring for 1 minute then removed it and left it to cool for about 3 minutes.

Gino then gradually added the beaten egg to the dough, until the dough is smooth and glossy.

He lines a large flat baking sheet with baking parchment, and then piped the dough balls over the baking sheet, allowing space between each for rising. He bakes them in the oven for 20-25 minutes until the profiteroles are puffed and golden.

After this first phase of baking, he removes the profiteroles from the oven and poked a hole in the bottom of each to let out the steam, he then returns the bake to the oven for 5 minutes, after which they are left to Cool.

He then whips the cream and vanilla paste together until stiff before spooning into a piping bag.

He pipes the cream into the centre of the choux buns and stack on the serving plate.

He then prepares the chocolate sauce by putting the chocolate and cream into a pan over a low heat stirring occasionally, until the chocolate has melted into the cream to make a smooth paste. He stirs in the butter and salt, to give a glossy sauce.

Finally, Gino pours the chocolate over the top and finish with a dusting of icing sugar.