Paul met with Fiona Cairns, the luxury cake maker and designer who was responsible for baking Prince William and Kate Middleton’s wedding cake.

Fiona came to Paul kitchen to show the master baker how she made her French raspberry tart. Now Paul wants to show queen of cakes how he makes another French inspired delight, pear and apricot frangipane tart.

Frangipane is a filling made from or flavoured with almonds. This filling can be used in a variety of ways including cakes, tarts and other pastry dishes.

To make the filling for his bake, Paul beats butter and sugar together until light and fluffy. He adds ground almonds, flour and eggs and mix thoroughly to combine. He stirs in the vanilla extract and one tablespoon of flaked almonds.

The master baker then, scattered over the remaining flaked almonds and baked his tart for 25-30 minutes, until the filling is set and golden-brown. 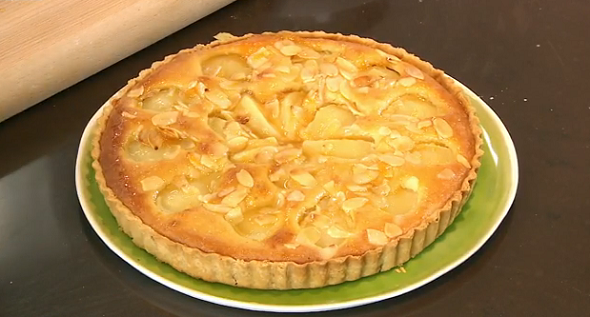 He left it to cool in the tin before serving with whipped cream.