Warm the fish stock in a medium saucepan then make the sauce by placing 100g of butter in a heavy-based saucepan and melt over a medium heat.

Stir in the flour until a paste (roux) is formed. Cook over a gentle heat for 2 mins without colouring, stirring continuously, then whisk in the white wine and fish stock, ensuring there are no lumps.

Simmer gently for 8 mins, stirring continuously. Remove from the heat, then whisk in the double cream, lemon zest and juice and dill. Place to one side and keep warm.

Melt the remaining 25g of butter in a very large frying pan or wok over a high heat. When it starts to froth, add the spinach, turn and season with salt and pepper. Once the spinach has wilted (around 2 mins), remove and drain in a colander, then leave to cool.

Using a sharp knife thinly slice the salmon fillet (around 5mm in thickness) along the length of the fillet. Lay the slices out on a tray and season with black pepper only.

Repeat again using the remaining lasagne, fresh salmon and spinach and finally the remaining sauce. Sprinkle with grated Gruyère. Bake in the preheated oven for around 25-30 mins until golden brown and bubbling.

To make the salad, cut the fennel in half lengthways, then, using a sharp knife, slice thinly and place in a bowl.

Add the olive oil and brown sugar and mix thoroughly. Spread out evenly on a baking tray lined with baking parchment and cook in the oven for approximately 15-20 mins until caramelised. Remove from the oven and leave to cool slightly.

Once the lasagne is ready, remove from the oven. Place the rocket in a bowl and add the baked fennel. Season with salt and black pepper, then gently toss together. Place on top of the lasagne to serve. 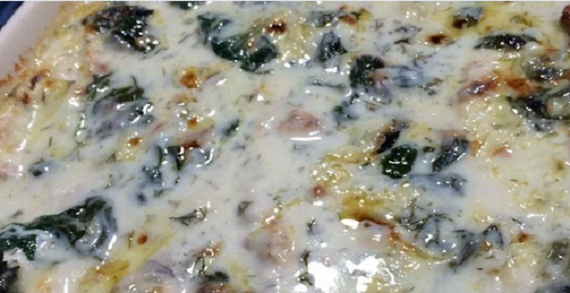