On the fifth episode of Jamie and Jimmy’s Friday Night Feast, the duo set out once again to revive yet another British treat, this time it is the turn of the Colchester pudding.

The Colchester pudding has its roots in the county of Essex – home to Jimmy and Jamie – and is a trifle-like fruit, tapioca, custard and meringue treat that is in danger of disappearing.

However, Jamie and Jimmy are not the first to try to keep this pudding from dying out. In 2009 food historian and event organiser Don Quinn made an attempt to relaunched the pudding with the town’s mayor at the time, Sonia Lewis.

On their arrival, the current Mayoress made the pudding to the original recipe for the pair to try. They though it was delicious but wanted to put their own twist on the classic recipe as part of their Regional Food Fight campaign. To achieve this they visited the Colchester Institute, the biggest catering college in the country, to enlist the help of some of the students to develop an improve the recipe.

The original pudding has separate layers of tapioca and custard, but under the supervision of Jamie, the students combine the two to transform the texture, and add orange zest, vanilla and double cream to enhance the flavour.

Jamie and Jimmy then took the new layer on a road test at Colchester zoo to get feedback from the local community. It received a massive thumbs up. 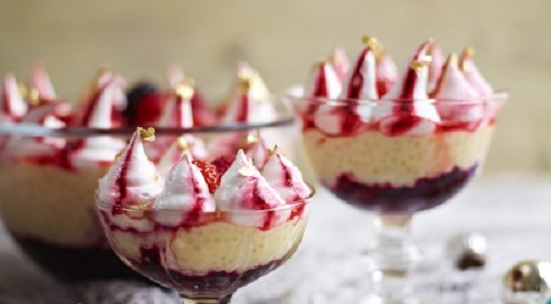