Enrique Iglesias performed his new track and was interview by Eamonn Holmes and Ruth on This morning.

The American star is inn the country to promote his tenth studio album ‘Sex And Love’ which features collaborations with Kylie Minogue, Flo Rida and Pitbull.

Eamonn Holmes and Ruth Langsford were keen to know how Enrique and partner Anna Kournikova, who have been together for 12 years, manage to be separated while the singer is touring.

He revealed: “Actually I make it a rule that I don’t leave my house more than ten, 15 days in a row.

“It is important for me, I need that, that privacy.”

Enrique also let slip that despite Anna having once been a tennis player, he’d never been to a certain the Wimbledon championship:

“I’ve never been to Wimbledon,” he said. “I only watched her once – at the US Open. I get nervous. I would rather watch it on TV. I get nervous watching her. My job is a lot easier. There is no competition!” 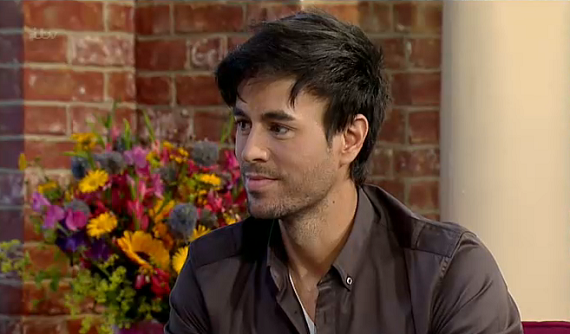