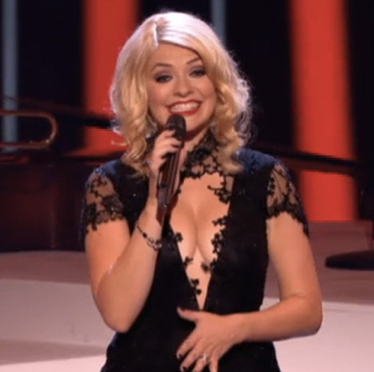 Holly Willoughby, one of the nation’s favourite daughters, took centre stage in more ways than one when she gave the audience an eyeful on the final of “The Voice 2013” proudly displayed her assets in a low-cut maxi dress.

The 32-year-old presenter distracted many viewers with her outfit – a black lace gown with a plunging v-neck and a thigh-high split.

Millions of viewers tuned in to watch the final of the Voice on the BBC, but many were not focusing on the singing talents on stage but instead they were looking in disbelieve at the presenters boobs.

“This Morning” host Holly earned the nickname “Willoughbooby” from her “Celebrity Juice” co-star Keith Lemon but rather than be offended, she seems to have embraced it.

However, on the night it was all too much for some viewers, because since the final of The Voice was aired on Saturday, the BBC has received over 100 letters of complaints about Holly Willoughby’s attire, according to reports.